Located on the island of Formentera, El Pirata restaurant is one of the most charismatic and historic restaurants in this paradise on earth.

The beginnings of the restaurant

Its beginnings date back to the early 1970s, when Pascual, also known as El Pirata (the Pirate) and his friend Pablo decided to move to the island of Formentera to start a new professional career. To do so, they bought a bus and turned it into a bar which they ultimately set up on on Migjorn beach.

During the early years, many a story is said to have taken place on El Pirata Bus. The Balearic Islands were famous for being an important hippy commune and for receiving visits from such luminaries as Bob Dylan and Pink Floyd, among many others. A combination that made the islands a paradise far from the reality that existed back then.

In 1983, El Pirata was forced to change its format from a bus to an all-wood beach bar. Many people have passed through this legendary restaurant, but after more than 40 years of history, El Pirata has kept its original essence.

A must for all tourists who set foot on the island of Formentera. Still at the helm is Pascual El Pirata, who is responsible for making sure that every day at the bar is special. Here you can enjoy cold drinks, cocktails and delicious tapas, all backed by a dreamlike landscape.

On top of that, in the evening you can witness one of the most beautiful sunsets in the Balearics, while listening to chilled musical vibes and in the company of everyone who will form part of this charismatic bar's history. 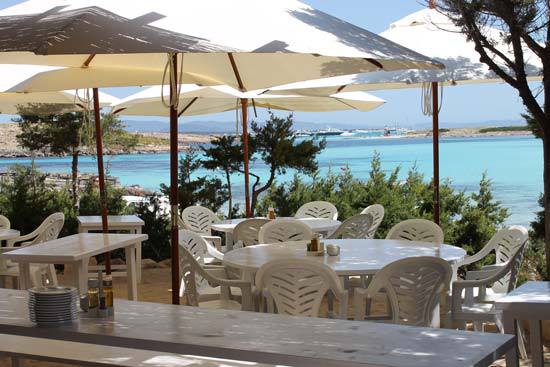